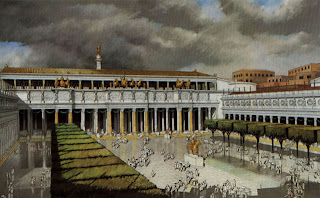 The month of February marks the third anniversary of the founding of Byzantium Novum! On February 8th, 2010, the web site for our Micronation went online and we began accepting Citizens!

During these three years we have made good progress toward our goals of restoring Byzantine civilization and culture. Our work to establish an international Byzantine community and to manifest Byzantine statehood has been successful so far - even though we are realistically still in our beginning.

To date we have 352 official Citizens, an average of well over 100 new people each year. That is surprisingly good, considering how little most of the modern world knows about the Eastern Roman Empire! We have established Byzantine colonies in many places worldwide which work to provide a real-world presence for Byzantine interest. We currently have 3,780 Facebook contacts, which allows us a substantial Internet presence. In short our nation continues to expand at a realistic, manageable pace.

Our overall statistics are in a way less as important as the story of the people that make up our Community. Our forums, and our local colonies and provinces are providing people a way to gather and rekindle something of the Eastern Roman world. Our very existence has inspired people to learn more about the wonderful history and culture of Byzantium... and to share the dream that it can live again today. We have many wonderful and skilled Citizens working to bring Byzantium to life, including accredited scholars and published authors. We have Citizens building local community, producing artwork and literature, and who have created a truly professional periodical publication. An amazing start to a long journey!

Three years may not seem like much for a fully developed nation or community. It IS a big deal for a Micronation. Most "grassroots" ideas of founding new official world states simply don't last through the first year. Byzantium Novum is one of the few Micronations that has continued to grow and gain strength. The old saying "Rome wasn't built in a day" is just as true for NEW Rome... our goals are important enough to keep working toward for years to come.

As we continue, we can ultimately help manifest a wider renewal of Byzantine interest and activity worldwide. With patience and effort, we WILL see active local Byzantine provinces around the world. This will provide modern Byzantines the opportunity for local gatherings and community efforts.

As our numbers grow from the hundreds and into the thousands, we may even be able to establish a world headquarters to consider our international Capital. If medium sized corporations can maintain sites of that size so can we... and such a place would truly be a jewel among modern Sovereignty Projects!

Spring is almost here, and we can begin looking forward to May 11th, Byzantium Novum's "International Byzantine Day." May 21 is the anniversary of the founding of Constantinople - a day which proved that old Empires can be renewed, and that new Sacred places can be created. This day celebrates both ancient tradition and modern hope... the foundations that Byzantium Novum are built upon. The more we promote this holiday, the more we can bring Eastern Roman Civilization to the public!

Posted by Marcus Cassius Julianus at 8:09 AM